Long-Term Benefits Of Botox Supported By Study On Identical Twins 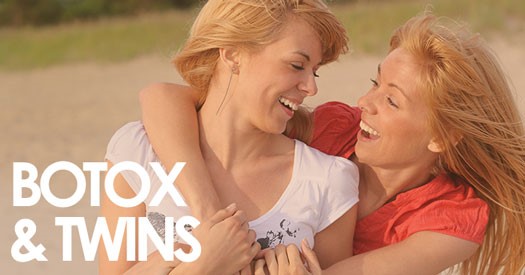 Botox continues to be one of the most popular non-invasive treatments for patients wanting to turn back the clock, but many wonder what the long-term effects of the treatment may be. With new research comparing twins and their use of Botox, we are given a better look at how Botox can really affect one’s appearance in the long run.

A recent study compared the effects of Botox on facial lines in identical twins. The study looked at two sisters — one who had undergone regular Botox treatments over the past 13 years, and the other who only had Botox treatments twice, three and seven years prior to the study. The results found that the twin treated with Botox regularly did not show as many of the signs of aging as her minimally-treated twin, who had problems with forehead and frown lines. The twin sister who had regular treatments also had less-visible crow’s feet than her sister. (The minimally treated sister is on the left side of the images, whereas the regularly treated twin sister is on the right)Researchers concluded that long-term treatment with Botox could in fact prevent the development of facial lines (including crow’s feet) that are otherwise more visible at rest when left untreated. Best of all, no adverse effects were reported over the course of the 13-year study for either twin.

Is Botox Right for You?

If you are concerned about fine lines and wrinkles, but aren’t quite ready for laser treatments or surgery, Botox and other injectables may be a better option. Botox is a relatively painless treatment and can be especially effective for smoothing out deep wrinkles and lines around the forehead. We can also administer Botox to treat crow’s feet. If you have any of the following concerns, Botox may be right for you:

Botox has very few short-term side effects and is tolerated well by virtually all patients. In very rare cases, Botox can cause drooping of the eyelids and brows or migrate to other parts of the face. Other possible side effects include bruising, headaches, and mild pain at the injection site. When administered properly, there is no risk of botulism.

Most patients see results from their Botox treatment within 14 days and the effects wear off within a few months. Depending on the areas being treated, you may need to come back for touch-up treatments every three to six months. Botox can be very effective for softening lines and wrinkles, and in some cases, this non-surgical treatment can take a few years off your appearance.Schedule your Botox consultation at NW Face & Body today!

How Often Should You Get A Facial Peel?

How Do You Fix A Weak Chin?

What Are The Causes Of Breast Sagging?

What Are Seromas After A Tummy Tuck?

Does Everyone Have Cellulite?